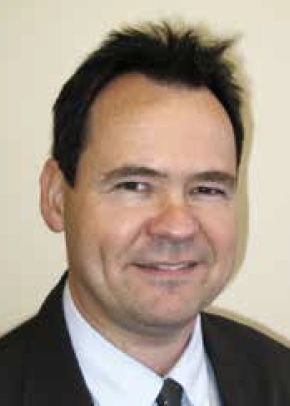 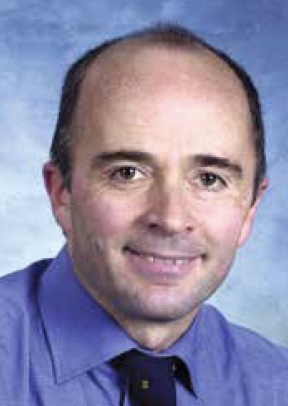 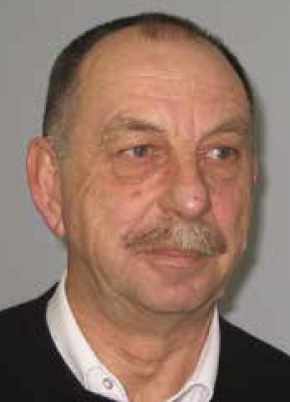 This article is reproduced having been originally published in Asphalt Professional issue 59, February 2014. It is worth bearing in mind while the content would have been correct at the time of publication, standards may have changed since.

On 2 February 2012 the Scottish Minister for Housing and Transport announced that a consultation would be held to consider the use of existing legislation to ensure that utility companies contribute to the cost of making good long-term damage to roads caused by utility trenches (Figure 1). 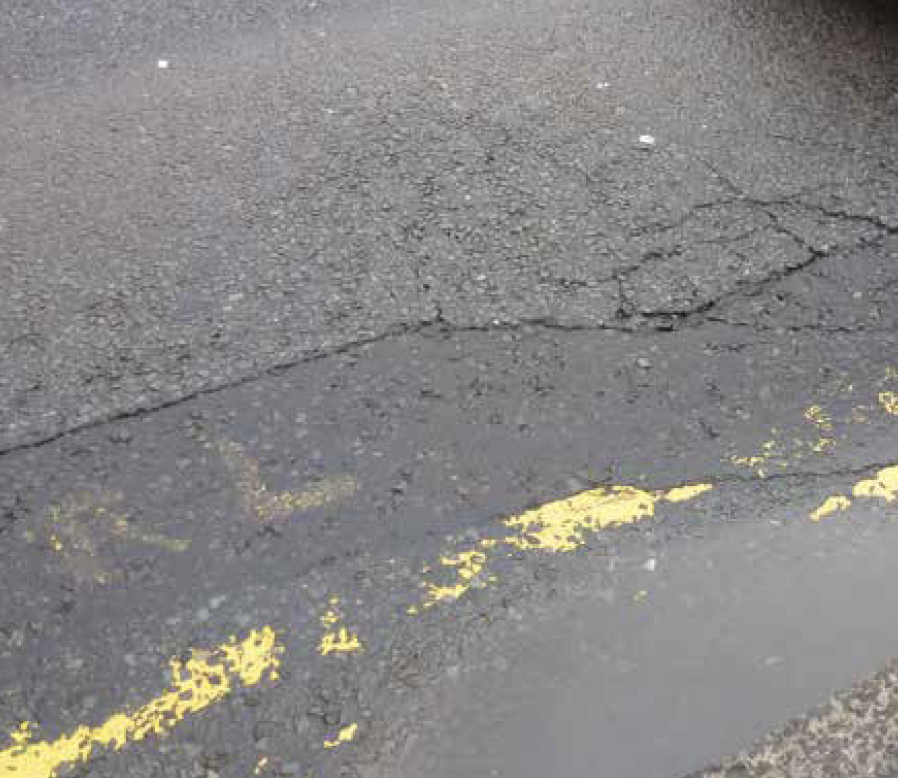 Visual inspections have been going on for many years to assess and record the general condition of a road. The method adopted for the study was a modified version of a technique originally developed by the Road Research Laboratory (Lee, 1957) to inspect fullscale road experiments. The general approach utilises a basic marking regime using a 7-point scale with fault suffixes which is applied by a panel of widely experienced road engineers. The system has been fully utilised by Transport Scotland (McHale et al, 2011) and the Highways Agency (Nicholls et al, 2010) in assessing the durability of asphalt surfacing over the last decade. 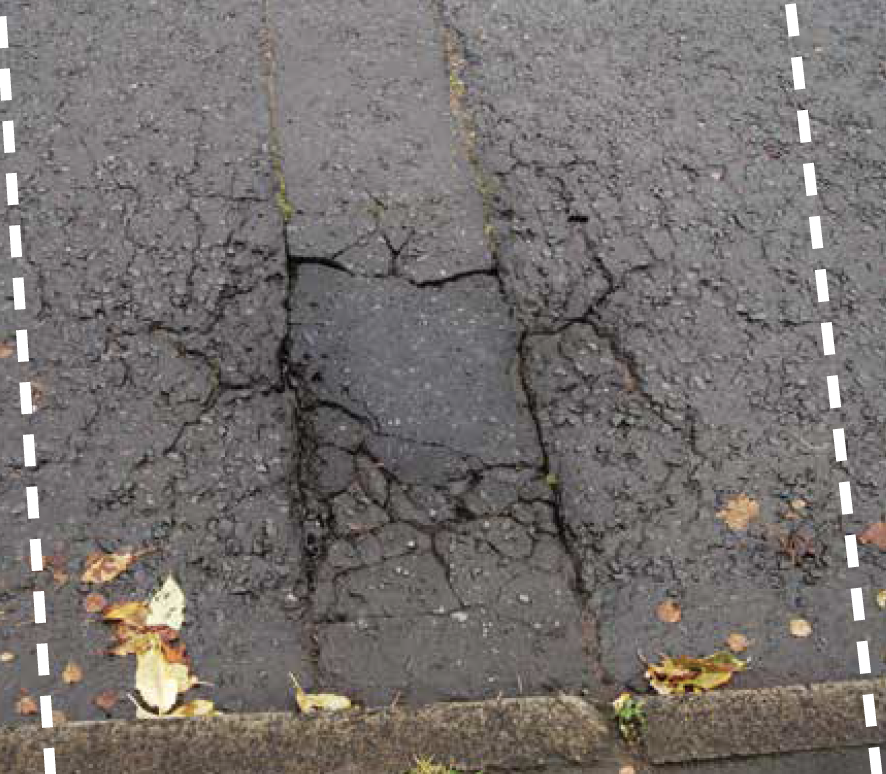 It was also necessary to revise the fault suffixes, or defects, to reflect the type of faults that were likely to be encountered when assessing utility reinstatements. The basic marking system, is given in Table 1 and the revised fault suffixes in Table 2. 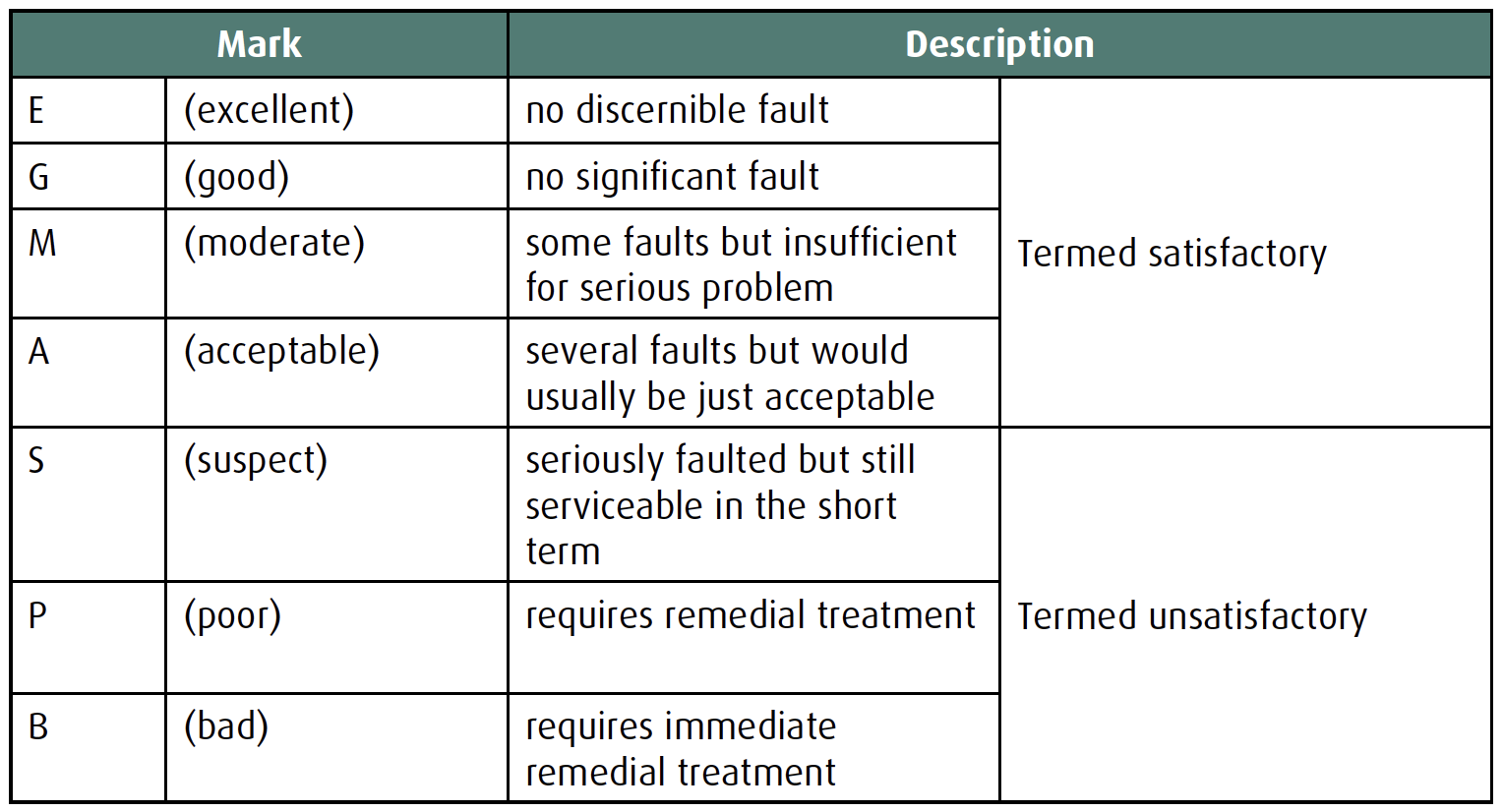 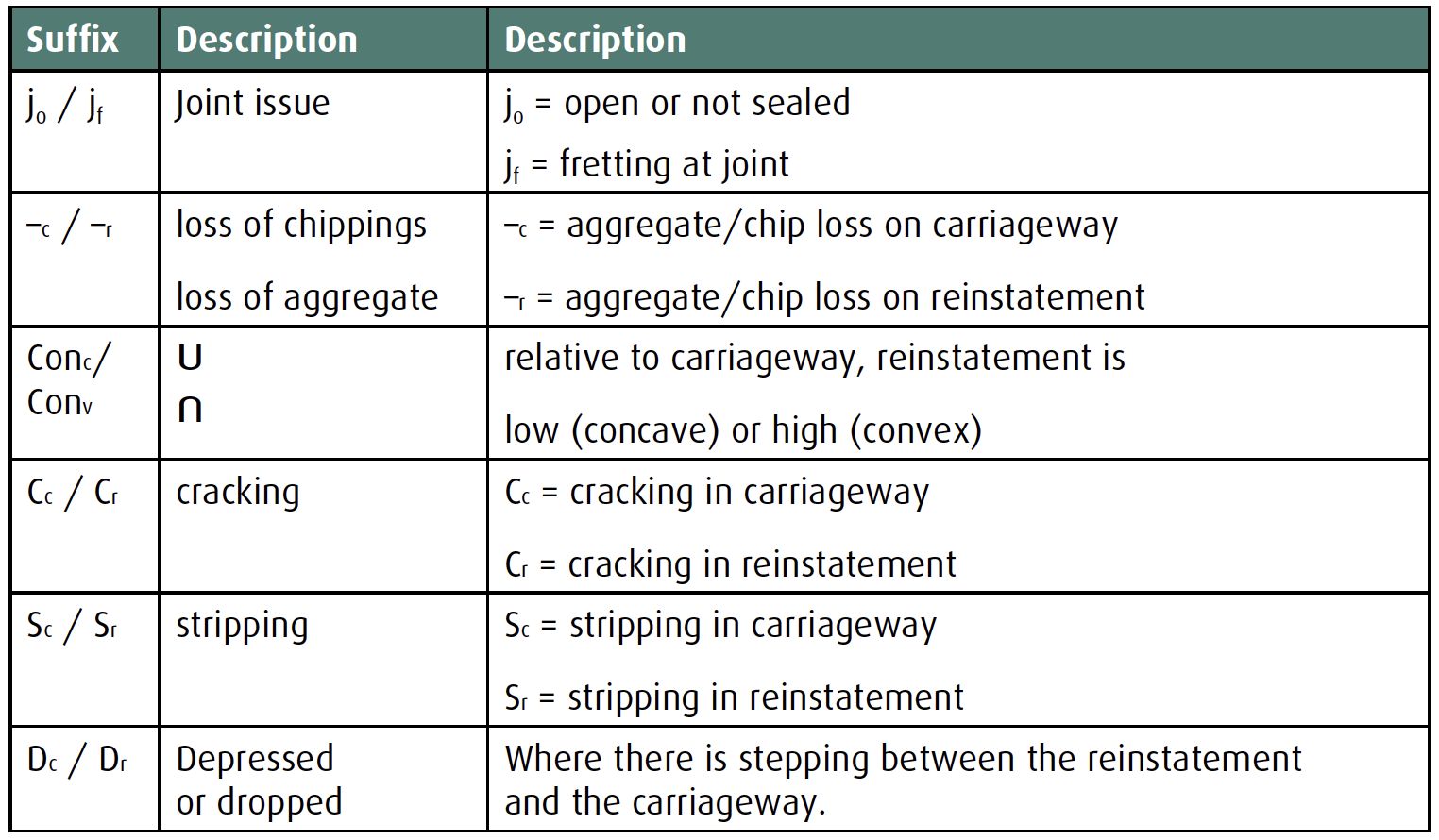 Sites were selected using information from the Roads Authorities & Utilities Committee (Scotland) (RAUC(S)) National Coring Programmes. A significant advantage of adopting this approach was that it provided a representative sample of reinstatements that had complied with the Specification for the Reinstatement of Openings in Roads (SROR, 2003). The national coring data also included good locational reference and age data for the reinstatements.

Contacts were made with Edinburgh City, North Lanarkshire, East Lothian and Aberdeenshire. The areas were selected to provide examples of city, urban, semi-urban and rural areas.

Following a successful pilot study in Aberdeenshire, the modified visual inspection method was applied to 127 reinstatements that ranged in age from between two and ten years. The mean visual condition marks for the different areas were plotted for the reinstatements inspected. The individual results for each site, for graphical representation, were converted using the following transformation:

An example of the mean visual condition marks for North Lanarkshire is shown in Figure 3. The result, as with other areas surveyed, produced a considerable scatter of performance data for each site inspected. These results were not considered abnormal and the scatter reflected the many factors that can influence the performance of a reinstatement, e.g. location in carriageway, trafficking density, substrate preparation, quality of material, and existing condition of carriageway. 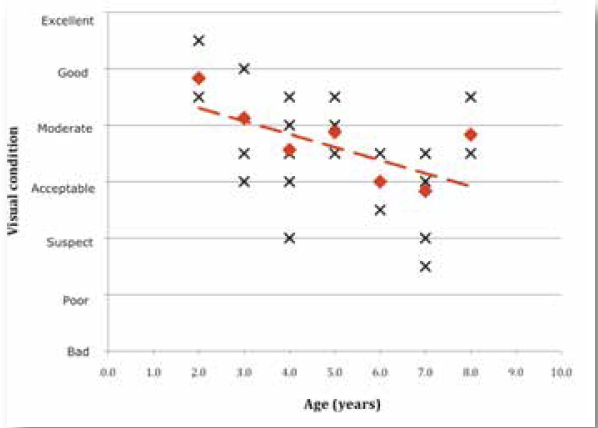 The dashed red line represents a trend line based on the average mark if the sites are grouped by age. The trend line represents a simple linear relationship between the age of the surface and a measure of its condition and was used for simplicity. In practice a reinstatement is more likely to deteriorate following an ‘S’ shaped curve, i.e. it changes at a gradual rate for a few years then it starts to deteriorate more rapidly.

Several observations were made as part of the surveys and are described below.

Where reinstatements were located in lightly trafficked areas, generally no significant deterioration to the reinstatement or its effect on the surrounding carriageway was noted. However poor joint construction was found to be endemic, e.g. 84% of the city sites were assessed as exhibiting joint defects. An example of a poor joint is shown in Figure 4. 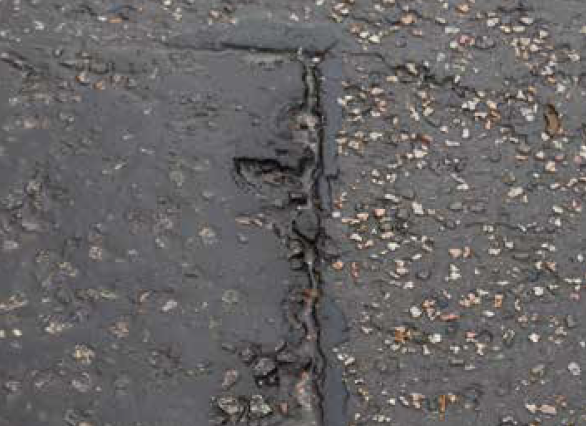 The density or extent of reinstatements was observed during the city survey. In many instances reinstatement tracks cut across other reinstatements or were located within other reinstatements. A general observation was that this affected the profile of the existing carriageway and made it more susceptible to dynamic loading by vehicles. The high number of joints also increases the likelihood of water ingress and subsequent damage to the carriageway. The early development of potholes can be seen in Figures 5 & 6. 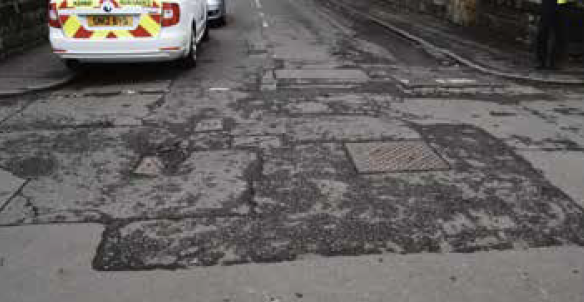 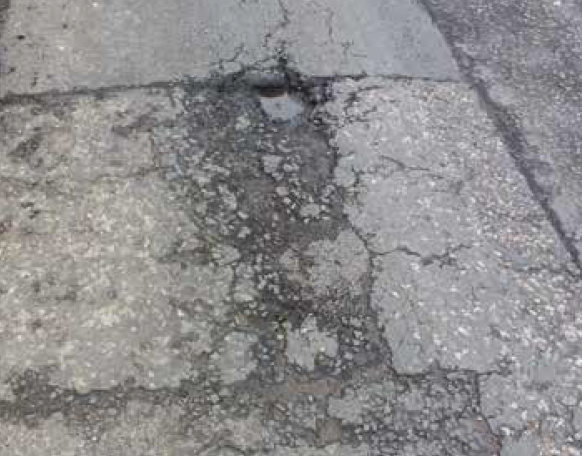 An examination of all the collected data, i.e. 127 sites ranging in age between two and ten years, showed that 21% or 27 sites were assessed to be at or below a level of serviceability that is considered to be acceptable.

Attempts were made to fit a linear regression line to data for longitudinal tracks, transverse tracks, patching, and light, medium traffic and high traffic. The clearest deterioration trend was observed when average markings from sites categorised as ‘heavily stressed’ were used. Figure 7 represents a small sample (21 data points) and indicates that reinstatements and the surrounding carriageway will require maintenance after approximately 6-7 years in service. Additional data points would make the trend line more robust but it is not expected to significantly change. 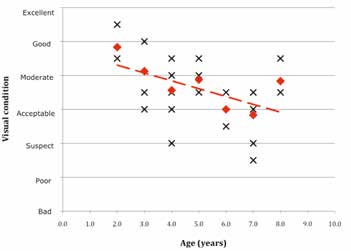 In total, 127 reinstatements located in four different council areas representing rural, semi-urban, urban and city environments were inspected using a revised version of the TRL Inspection Panel Methodology. Reinstatements ranged in age from between two and ten years old. The mean visual condition marks for the sites were analysed and attempts were made to fit linear regression lines, or deterioration trends, to data.

The results produced a considerable scatter of performance data for each site and area inspected reflecting the many factors that can influence the performance of a reinstatement, e.g. location in carriageway, trafficking density, substrate preparation, quality of materials, and the existing condition of the carriageway.

In general, the study showed that reinstatements deteriorate with time and the rate of deterioration and damage to adjacent carriageway increases in areas where high levels of trafficking is experienced. Analyses of data from the most highly stressed sites indicated that reinstatements and the surrounding carriageway would require maintenance after approximately 6-7 years in service.

Twenty one per cent of the data (27 sites) were assessed to be at or below a level of serviceability that is considered to be acceptable, i.e. many of these sites were considered to need remedial treatment and repairs.

Poor joint construction was found to be endemic, with 84% of the city sites assessed as exhibiting joint defects. This is compounded in a city environment where there are multiple reinstatements in the same location. On one site there was clear evidence of damage to the carriageway caused during the trench excavation works.

The study provides evidence that utility reinstatements do cause long-term damage to roads. The report also recommends that greater care and supervision is needed in the construction of reinstatement edge joints and suggests a change of detail that would make improvements to joints in the future.

The work described in this report was carried out by the Design & Maintenance Group of the Transport Research Laboratory under contract to the Scottish Road Works Commissioner.

This paper provides a summary of the work described in TRL PPR651, Long-term damage to roads caused by utility reinstatements. The full report is available as a free download from www.trl.co.uk